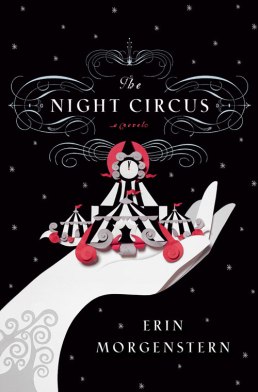 “The circus arrives without warning.”

I have never read nor will ever read anything like this book. Morgenstern orchestrates a masterful mixing of genres whose wheres and the whys, much like the circus itself, are deliciously difficult to pin down. The deeply human longing for magic and wonder are piqued within the dream-like realm of Morgernstern’s prose, and I couldn’t help but be enchanted by it.

Le Cirque de Reves is a world unto itself, where midnight revelers can get lost in the sea of black and white tents, experiencing delights that seem impossible if one only thought about them. There are tents of clouds, gardens of ice, and performers whose skills are unparalleled across the world. It is a place of mystery and magic unlike any other, and it leaves whispers and incredible tales in its wake.

For those caught within the circus it becomes apparent as the years pass that all is not as it seems. Marco-the young assistant of the circus proprietor-and Celia-daughter of a famed illusionist-are locked in a strange game of wills and illusion for which their masters have prepared them since childhood, with the circus as the stage. But even Marco and Celia do not understand the full scope and rising stakes of the game, leaving the circus and the lives of everyone within it hanging in a precarious balance.

Morgenstern is a master at showing rather than telling. The mystery evoked by the circus, by the vague identities of Mr. A. H– and Prospero the Magician, and a game whose rules are never fully defined keep the reader wondering through the book. The reader learns as Marco and Celia do, but there is never a moment of obvious, heavy-handed exposition. The circus and the game are both revealed over time, but it is a slow, deeply satisfying revelation with hints and deceptions strewn throughout. I loved every moment of it.

I did not feel particularly drawn to any of the characters, but the book is about the circus more than the characters, and the whole of the game rather than individual pieces. But The Night Circus also comments on Mr. A. H– and Prospero’s removal from humanity and their inability to recognize the importance of the individual lives they have trapped within their game. They can only see the game as a whole, as a way to prove ideas that are beyond short human lives. But those lives are not inconsequential as we are shown in the more than fifteen POV’s Morgenstern employs. Each character–from Marco and Celia to Bailey and Mr. Thiessen and Lainie–plays an important role in the creation and continuation of the circus as well as its ultimate fate.

I have read some very negative reviews of this book, and I while I can understand where some of them are coming from I think many readers missed the point of this book. Yes, the pacing is slow but it is also extremely deliberate, full of lyrical description that anchors the story far more than the plot. If you are a reader who needs fast paced, action type stories, then I can understand why you would dislike this book. But the tone of deep magic and wonder sits at the core of The Night Circus, evoking a surreal landscape, a memory of old fables told around hearths in the night. In fact, Mr. A. H–, in one of the most evocative monologues in the book, comments on the nature and importance of stories:

“Someone needs to tell those tales. When the battles are fought and won and lost, when the pirates find their treasures and the dragons eat their foes for breakfast with a nice cup of Lapsang suchong, someone needs to tell their bits of overlapping narrative. There’s magic in that. It’s in the listener, and for each and every ear it will be different, and it will effect them in ways they can never predict . . . That tale will move them and drive them and who knows what they might do because of it, because of your words . . . Your sister may be able to see the future, but you yourself can shape it, boy. Do not forget that . . . There are many kinds of magic, after all.”

Stories enchant us. The idea of magic and adventure and things beyond our imagining drive us to explore and think and discover. The mystery and magic permeating this text did just that for me, and will remain in my mind for years to come–just as the memory of the circus does in the minds and hearts of its revelers. Morgenstern shows us a world where magic is possible, where love is undefeated, where magicians live impossibly long lives.

And I think that is what this book is about more than anything: the wonder in stories that can show us places and ideas we could never have imagined and that drive us to wonder at the beauty and impossibility in the real world.

2 thoughts on “The Night Circus by Erin Morgenstern”