I’m a picky reader. If a book doesn’t hold my attention, I put it to the side and start something else. Then I end up in a situation where my Goodreads tells the world I am reading eight books at once. After a few months, I clean it out before it starts building up again. Today, I am only at three books, which isn’t too bad. But here they are and here are my first impressions.

I started this book years ago, but put it down only a tenth of the way through when someone made a degrading comment about it. Following this comment, I learned of the controversy surrounding the multiple parallels to Jane Eyre. So, I put the book aside for EIGHT YEARS.

One of my friends recently lent the book to me, declaring that it was her favorite book of all time. So I decided to give it another try. Yes, it is dark, yes it has a lot of parallels to Jane Eyre, but I also can’t seem it put it down. Like Mr. Rochester, Maxim is a Byronic hero as Byronic as they come–but far less sympathetic. The heroine, unlike Jane Eyre, has no spunk and no conviction. Neither character is likable. I don’t find myself rooting for either. But du Maurier weaves an effective tale of jealousy and the darkness it brings and I can’t wait to unravel the mystery surrounding Manderly. 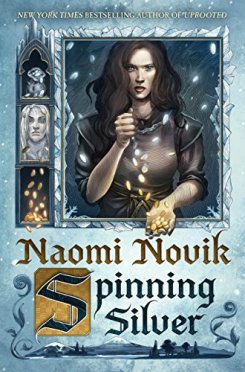 I put this one on my to-reads list long before its release earlier this summer. I loved Novik’s Uprooted and was intrigued by the description of “retelling of Rumplestiltzkin”. That is definitely a fairy tale you do not see reproduced.

Thus far, I have enjoyed Novik’s interpretation, though I’ve found the prose at times heavy handed and parts of the story dragging. I am about half way through right now and fully intend to pick this book up again when I finished Rebecca.

Tempests and Slaughter by Tamora Pierce

Tamora Pierce is a legend. She is a pioneer of women in fantasy. She shaped the young adult category into what we know it as today. When I was 12, I went to a meet and greet for Trickster’s Queen. Fourteen years ago, she told a crowd of excited teenagers that she was planning to write a book about Numair, but that it wasn’t slated to be published until 2010. After an almost ten year hiatus, Pierce finally came out with the book she had promised so many years before–in 2018.

And . . . thus far I am underwhelmed. Sadly. She writes with the ease of someone who knows her genre and her audience. But the story has been dragging. And at half way through there is little semblance of a plot to be seen. I am planning to finish and write a full review when I do, so keep your eyes peeled for that.