If you’ve followed my blog for any amount of time, you will know that fantasy and historical fiction are my two favorite genres. Books that combine both elements, however, make me absolutely giddy. Well done historical fantasy, as I’ve dubbed this genre, is much more difficult to find than you might expect (with the industry riddled with time-traveling romances like Outlander), so today I’ve drawn up a list of my top ten books for lovers of well done historical fantasy. END_OF_DOCUMENT_TOKEN_TO_BE_REPLACED 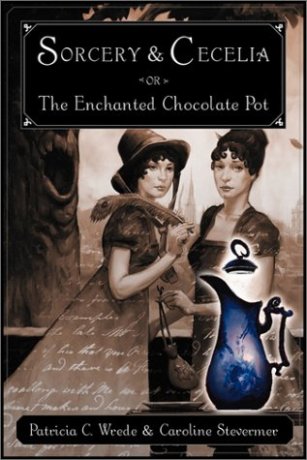 Have you ever been in the middle of Pride and Prejudice and thought: “you know what this book needs? Wizards.”

Because that is exactly what this books adds. And its awesome.

One of the best parts about Sorcery and Cecelia is that it was crafted as part of a letter writing game between two highly skilled and hilarious authors. Patricia C. Wrede and Caroline Stevermer wrote letters back and forth, each from the perspective of a different character, Patricia as Cecelia and Caroline as Kate. The authors were not allowed to talk to each other about the future of their stories, and they simply had to play off each other’s letters. The result is one of the most hilariously entertaining novels I have ever encountered.

Cecelia and Kate are cousins and best friends who are separated when Kate is taken to London for the season. As the girls begin their correspondence, Cecelia starts to uncover a world of magical ability despite her aunt’s hatred of the subject. Meanwhile, in London, Kate stumbles upon a feud between two wizards, and somehow finds herself in a sham engagement to a man who drives her crazy. As the cousins continue to exchange letters, they unravel a sinister plot that threatens both girls and the people they hold dear.

The above is not really a great synopsis, but with two conjoining story lines its hard to summarize. Just take my word for it though that it will be one of the most entertaining reads you will ever have. Cecelia and Kate are both wonderfully witty, bold, and mischievous, often taking matters into their own hands without waiting for someone to do things for them. And, of course, these are also two excellent romances woven throughout, which are just as amusing and hilarious as the rest of the book.

The end will leave you craving more, and though there are two sequel books, I have never been able to get all the way through either of them (believe me, I’ve tried multiple times), so I wouldn’t recommend them. Which actually makes me quite sad.

Either way, this is NOT a book to pass up on if you’re looking for something fun to read.

And also, Jane Austen and magic. How can you say no to that?